The national homeownership rate slid again in 2015 despite the fact that most Americans think that real estate is a sound financial decision. So it comes as welcome news that both single-family and multifamily construction starts were up last year, key to addressing inventory constraints and affordability issues that are keeping more people from owning homes. 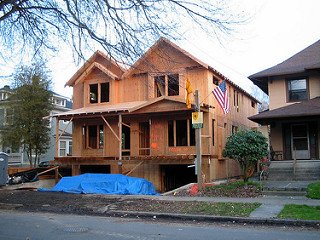 Those are a few key findings from the Harvard Joint Center for Housing Studies’ 2016 State of the Nation’s Housing report, which put the U.S. homeownership rate at 63.7 percent in 2015, down from a high of 69 percent in 2004. Households aged 35 to 44 saw the largest dip in homeownership levels during that time period, with just 58.5 percent owning property at the end of last year.

“Tight mortgage credit, the decade-long falloff in incomes that is only now ending, and a limited supply of homes for sale are all keeping households — especially first-time buyers — on the sidelines,” HJCHS Managing Director Chris Herbert said in a press release. “And even though a rebound in home prices has helped to reduce the number of underwater owners, the large backlog of foreclosures is still a serious drag on homeownership.”

Still, the majority of Americans, particularly millennials who currently rent, aspire to homeownership. Citing survey results from Demand Institute, the report says that 83 percent of all households expect to one day purchase a home. Seventy-eight percent of those polled believe that a home is an excellent investment.

Prospective homebuyers are grappling with both a lack of inventory and rising prices. At the end of 2015, the national months’ supply of inventory for existing homes stood at 4.8, the fourth consecutive year that the market has had less than its normal sixth-month supply. The median price for an existing U.S. single-family home climbed to $222,400, up 6.6 percent year over year, while new home prices increased by 4.7 percent to $296,400.

Builders are responding to buyer demand, with single-family home starts totaling 715,000 in 2015, a gain of 10.5 percent on an annual basis. Multifamily housing starts rose 11.8 percent to 397,000, the highest since the late 1980s. Residential permits also increased in 70 of the 100 U.S. largest U.S. metro areas from the previous year, including San Francisco, which has faced notable inventory shortages over the past decade. Permit activity in the San Jose metro area slowed from 2014.

Homebuilders have plenty of work cut out for them if they hope to keep up with current and future demand. The U.S. added 1.3 million new households in 2015, the largest single-year increase in a decade. Over the next 10 years, millennials are projected to form 2 million households per year and will account for 40 million households by 2025.