The Bay Area’s natural geography and land-use restrictions limit the amount of new homes that can be built in the region, helping to keep real estate prices elevated when compared with other U.S. metro areas that have greatly expanded their footprints over the past decades. 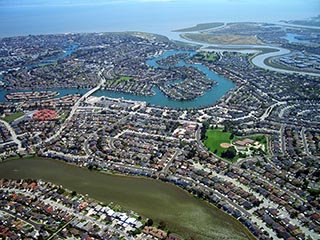 According to a recent study from BuildZoom, U.S. cities as a whole have maintained a steady pace of expansion into nearby rural areas over the past half century. From the 1950s to the 2000s, American cities as a whole grew by about 10,000 square miles per decade — an area about the size of Massachusetts. But not all cities are growing in the same way: One group can be classified as expensive (with an “e”) while the other can be characterized as expansive (with an “a”).

Expensive cities tend to have strong economies that generate demand for housing, as well as limited supply conditions. Such markets have an inelastic real estate supply, meaning that developers fail to build enough homes to keep up with rising values. These markets include major coastal cities such as New York, Boston, Los Angeles, and of course San Francisco.

Expansive cities also have thriving economies, but in these markets, developers respond to rising demand and prices by constructing a large number of new homes, increasing a metro area’s geographic footprint. Often located on plains or rolling countryside, these markets include Atlanta, Austin, Charlotte, Houston, and Phoenix.

To illustrate this concept, the report compares historical geographic growth patterns in the broader San Francisco and Atlanta metro areas. Atlanta’s footprint grew every decade from the 1940s to the 2000s. While San Francisco outpaced Atlanta’s geographic expansion in the 1950s, its growth began slowing in the 1960s and had basically come to a standstill by the 2000s.

The Bay Area’s growth is hindered primarily due to geography and natural land constraints but also because its residents tend to be environmentally conscious. BuildZoom points to several California laws that can slow expansion, including the Williamson Act, which offers tax credits to landowners who agree not to develop their parcels for a length of time. Affluent residents tend to favor such land-use restrictions, which only perpetuates the cycle of an inadequate supply of new homes in markets like San Francisco.

The report theorizes that as expansive cities become larger and wealthier, they could enact more land-use restrictions, leading them to behave more like their expensive counterparts. A less likely scenario involves expensive cities creating an adequate supply of housing by building denser housing or expanding outward.

In a recent report, John Burns Real Estate Consulting (JBREC) detailed some of the challenges facing homebuilders today, as construction costs are much higher than they were a decade ago due to both environmental regulations and city-financing arrangements. In California, additional new-construction fees include those for greenhouse gases, drought-tolerant landscaping, and water-retention requirements. JBREC says that building and impact fees now exceed $120,000 per home in some part of the Bay Area.