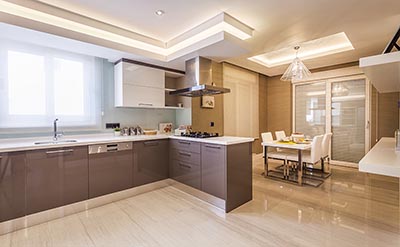 Last fall, a survey found that San Francisco homeowners spend the most money in the U.S. when remodeling their homes’ master bathrooms, and it turns out that the same trend applies to kitchens.

That’s according to Houzz’s 2018 U.S. Kitchen Trends Study, which says that the average major kitchen remodel for a 200 square-foot or larger room costs $42,000, including replacing the appliances and cabinets. Overhauling a kitchen smaller than that costs an average of $25,800.

Houzz notes that kitchen remodels cost more in coastal regions of the country, and that’s certainly true here in Northern California. The company puts the cost of renovating a large kitchen in San Francisco at $70,000, the highest in the U.S. San Francisco also has the nation’s biggest remodeling costs for small kitchens, which cost an average of $43,900 to overhaul.

Regardless of a home’s location, countertops are the most common kitchen feature to be replaced, cited by 94 percent of respondents, and that’s also the upgrade on which owners are most willing to splurge. Engineered quartz is the most popular countertop material, with 43 percent opting for that substance compared with 34 percent who choose granite. Quartz has seen its adoption rate increase over the past three years while granite has declined in popularity.

Similarly, 90 percent of homeowners replace their kitchen’s appliances during a renovation project, with nearly as many willing to splurge on them as those who spend big on countertops. More than 90 percent of respondents reported upgrading their refrigerators and dishwashers, while 82 percent are replacing microwaves

High-tech kitchens are becoming increasingly popular in renovation projects, and 25 percent of new appliances boast features such as touch-screen, voice, and wireless controls. One in seven homeowners is adding electronics to the kitchen, with TVs, electronic-device charging stations, and wireless speakers the most common devices. Houzz notes that home assistants in the kitchen are on the rise, appearing in 22 percent of remodeling jobs.

A final overwhelming kitchen renovation trend that the study highlights: the number of homeowners who opt for style changes. Nearly 90 percent of those surveyed were reinvigorating their kitchen’s style, up from 75 percent in last year’s survey, with transitional, contemporary, and farmhouse the three most favored looks.