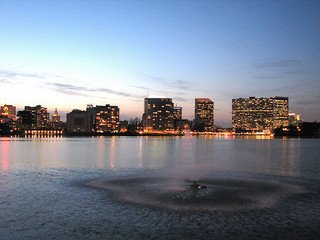 Bay Area home shoppers pushed out of the costly and hypercompetitive San Francisco real estate market are increasingly heading across the bridge, leading to a healthy uptick in Oakland sales.

Oakland buyers snapped up 2,503 homes in June for a year-over-year sales increase of 8.6 percent, according to Redfin’s most recent Real-Time Housing Market Tracker. As in May, Oakland had the highest annual sales-volume gains of the metro areas included in the report.

The number of homes for sale in Oakland was up 9.4 percent from June 2013, which likely helped contain year-over-year price growth to a modest 3.8 percent. Still, with a median sales price of $550,250, Oakland is the fourth priciest region that Redfin tracks.

San Francisco ($925,000) and San Jose ($770,000) were the nation’s two most expensive markets in June as measured by Redfin, and both saw the number of homes for sale decline on a monthly and yearly basis.

Nine out of 10 Golden State home transactions are now equity sales, the highest level since the dawn of the housing-market collapse.

The California Association of Realtors’ June pending and distressed sales report shows that 90.3 percent of home sold in the state were equity sales, up about 1 percent from May and 11 percent from June 2013. CAR says the number of equity sales has topped 80 percent for the past year, steadily rising since the beginning of 2014.

Inventory shortages are nothing new to Bay Area house hunters, and a recent CNBC article places some of the blame on pocket listings.

Citing statistics from the National Association of Realtors, CNBC says that although inventory across the country is up 6.5 percent from a year ago, many buyers don’t see it that way.

“However, the sentiment out there is that we still have a shortage of inventory, and I think that is due to the prevalence of pocket listings in some markets,” NAR Chief Economist Lawrence Yun told CNBC.

The article also points out that existing tight inventory conditions may prompt more sellers to keep their homes off the open market, since agents will have an easier time convincing them that intense demand warrants less exposure.