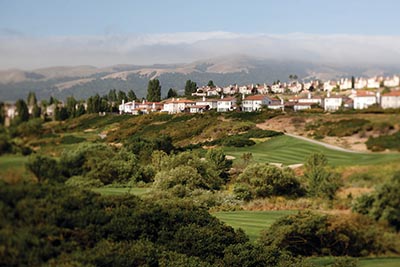 SmartAsset ranked 345 California cities using seven criteria to determine the state’s best places to call home. Contra Costa County’s San Ramon took the No. 1 spot, scoring a perfect 100 on the study’s scale. With a median home value of $754,700 and a median annual household income of $128,916, San Ramon is noted for being the location of Chevron and 24 Hour Fitness corporate headquarters, as well as the West Coast headquarters of AT&T.

The East Bay claims five of the top 10 spots on SmartAsset’s list. Alameda County’s Dublin (No. 3), Pleasanton (tied for No. 5), and Fremont (No. 9) benefit from their proximity to San Francisco and its thriving job market. No. 10 Hercules, in Contra Costa County, has the most affordable housing of the top cities, with a median home value of $395,800.

Silicon Valley also had two cities make the top 10. No. 4 Foster City has the fewest number of residents without health insurance — 2.8 percent. Best known for being the home of Apple’s headquarters, No. 7 Cupertino earns points for its median household income of $141,953.

STANFORD, U.C. BERKELEY AMONG THE WORLD’S 10 BEST COLLEGES
Stanford University and University of California, Berkeley are not only among the best schools in the state and the nation, they count among the most prestigious on the planet.

That’s according to the 2017 World Reputation Rankings from Times Higher Education, which ranks the world’s top 100 universities based on a survey of leading academics. Stanford University takes the No. 3 spot behind Harvard University and Massachusetts Institute of Technology, while University of California, Berkeley ranks No. 6. Both schools ranked in the exact same positions in the previous year’s poll.

More than half of the world’s top 25 universities are in the United States. Two other Golden States schools are among them: California Institute of Technology (No. 10) and University of California, Los Angeles (No. 13).

THE VAST MAJORITY OF AMERICANS AND CANADIANS CONCERNED WITH HOUSING AFFORDABILITY
Nine out of 10 Americans and Canadians believe that owning a home is one of life’s greatest achievements, and that same number are concerned about finding a solution for affordable housing.

A survey by Habitat for Humanity International found that inflated costs are the top barrier to homeownership, cited by 84 percent of Americans. Two-thirds of U.S. homeowners have struggled with costs at some point in time, and one-quarter report grappling with it now.

Aware of the current housing inventory shortages in both countries, Americans and Canadians aren’t particularly optimistic that affordability will improve. Seventy-two percent of Americans think that housing costs will increase over the next five years, while 84 percent of Canadians feel the same.

HOME SALES, STARTS TO REACH 10-YEAR HIGH IN 2017
Although housing starts and home sales took a hit this spring, low mortgage rates and a robust job market should help propel the U.S. housing market to another strong year.

That’s according to Freddie Mac Chief Economist Sean Becketti in the company’s June 2017 Outlook. The forecast says that housing starts fell by 2.6 percent from March to April, while existing home sales declined by 2.3 percent and new home sales dropped by 11.4 percent. But those trends should reverse thanks in part to a strong economy; May marked the 80th consecutive month of job gains, and the U.S. unemployment rate dropped to 4.3 percent.

Citing intense demand for housing along with low supply levels, Freddie Mac says that it expects home prices to grow by 5 percent by the end of the year.