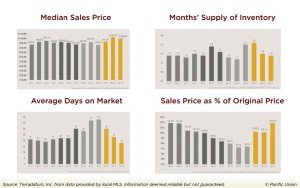 For the second straight month, median prices topped the $1 million benchmark in our Contra Costa County region, though they cooled slightly from March. Home prices in the region are now up nearly 16 percent year over year.

At 1.5, the MSI was exactly the same as it was one year ago. Buyers grabbed available homes in an average of 18 days, a one-year low and less than half the time they took in January. 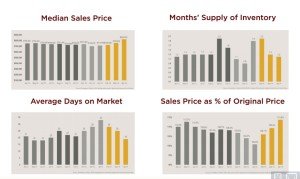 Median home prices in our East Bay region passed a milestone in April, climbing above $800,000 for the first time in recent memory to land at $824,000.

Inventory in the East Bay has been constrained for quite some time, and the 1.2 MSI was down a hair from March and identical to last April. Buyers took just 19 days to snap up properties, significantly quicker than in the first month of the year.

East Bay buyers have become accustomed to dealing with multiple offers and overbids, but in April, they were paying the highest premiums seen in a year: almost 14 percent.