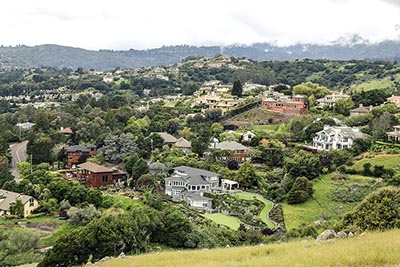 Bay Area residents are no stranger to exorbitant housing prices and a generally high cost of living, so prospective homebuyers will be relieved to learn that the region’s property-tax rates aren’t nearly as large as they are in many other parts of the country.

In an analysis of 2016 property-tax data, ATTOM Data Solutions found that U.S. single-family homeowners paid a total of $277.7 billion in property taxes last year. The nationwide effective property-tax rate was 1.15 percent, which translates to $3,296 per home.

California’s property-tax rates were the lowest of the most populous U.S. states — 0.78 percent for owner-occupied homes and 0.77 percent for investment properties. New Jersey had the nation’s highest property taxes in 2016, at 2.31 percent.

All nine Bay Area counties had effective property-tax rates that were lower than the nationwide average. Still, because home values in the region are so high, homeowners here still face sizable annual tax bills. Marin was one of nine U.S. counties where yearly property taxes were higher than $10,000. San Francisco, San Mateo, and Santa Clara were among the 32 U.S. counties where property taxes exceeded $7,000.

Here’s a breakdown of what homeowners paid in 2016 property taxes in all nine Bay Area counties, including effective rate and annual cost:

As The Mercury News explained in a report last December, coastal California cities tend to have lower property taxes thanks to Proposition 13, which caps rate increases until a home is sold. Since homeowners in coastal areas of the state tend to stay in properties longer and see higher price appreciation rates, they benefit from the 1978 tax measure more than those in less-expensive inland regions. The Mercury News says that pricey Palo Alto had California’s lowest effective property-tax rate in 2015: 0.42 percent.