While September Bay Area housing market activity disappointed a bit, with 7 percent fewer home sales year over year, it came on the tail of a strong summer. Overall this year, housing market activity is 2 percent higher than during the same period in 2016, with Marin and Alameda counties posting the largest gains. Figure 1 summarizes overall home sales in the Bay Area since January 2015. Note, however, that the four prior months — May through August — showed a solid 5 percent improvement over the same period in 2016. The strong activity recorded during the summer may have pulled forward some of the demand that would be typically seen in September.

Unfortunately, eight of nine Bay Area counties (excluding Solano) posted year-over-year declines in September sales, with San Francisco and Napa seeing the largest drops. However, despite September’s decrease in San Francisco, sales there are trending 1 percent higher for the year, with a stronger summer than last year. Napa County, on the other hand, showed a notable drop in September following continually lower year-over-year sales. In Napa County, however, sales of homes priced between $1 million and $2 million showed a solid 17 percent increase year to date, but with lower-priced homes accounting for 80 percent of transactions, the 7 percent decline in homes at that price point dragged the overall region’s sales lower. Like San Francisco and other Bay Area counties, Napa suffers from continually declining inventory of affordable homes.

Furthermore, the stronger demand at higher-priced segments seen throughout 2017 continued into September, with more sales of homes priced above $1 million. While overall sales were down 7 percent year over year, a lack of affordable homes led to a 16 percent drop in sales of homes below $1 million, while those priced between $1 million and $2 million were up by 13 percent and those priced above $2 million were up by 30 percent. But since sales of homes below $1 million comprise two-thirds of the market, they tend of have a greater impact on overall numbers. Figure 3 illustrates September’s year-over-year change in sales by price range and suggests that only Napa and San Francisco counties suffered from both declines in affordable homes as well as those priced between $1 million and $2 million. Homes priced above $2 million showed greater variability, but that is because there are fewer sales, and any changes are amplified due to the low base. 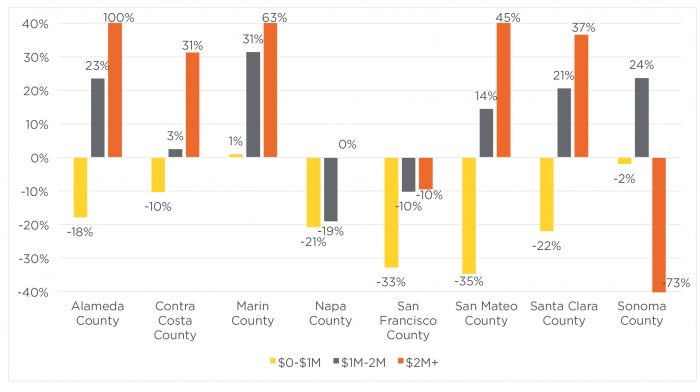 Figure 3 highlights that while the sub-$1 million price point suffered across the Bay Area, the market for homes priced between $1 million and $2 million remained vibrant. And again, as discussed in previous analyses, the main cause for the decline at the lower price point is the dwindling number of affordable homes for sale. To emphasize the scope of this problem, Figure 4 illustrates the year-over-year change in affordable homes for sale in each Bay Area county. Except for the slight improvement recorded in Alameda County in January of this year, all regions have since seen a continual year-over-year decline in inventory as noted by lines falling below the red zero-percent change line. Santa Clara County fared the worst in this regard, where affordable inventory was 50 percent below its September 2016 level. San Mateo and San Francisco counties saw respective declines of 37 percent and 33 percent. Sonoma County, while showing the slowest decline, continued to lose 10 percent or more of its affordable inventory. The falling trend in large part explains why we saw fewer sales in September. 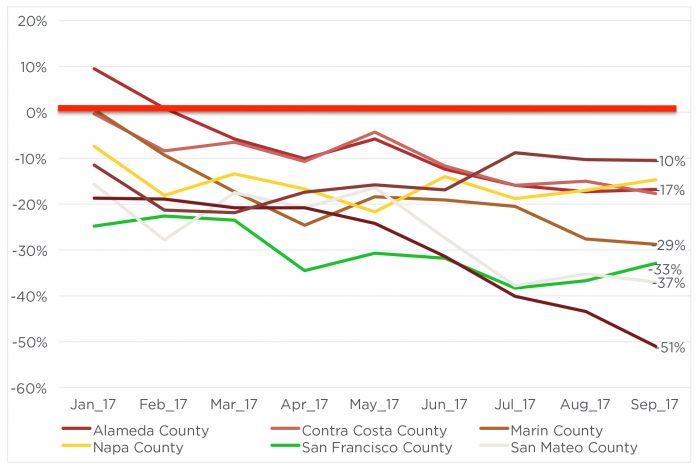 Homes priced between $1 million and $2 million not only saw improved sales but renewed buyer frenzy. Again, while insufficient inventory levels are responsible for a large part of the Bay Area’s housing dilemma, Figure 5 illustrates the extent that Bay Area communities suffer from falling inventory of homes in that price range. Sonoma, Alameda, Contra Costa, and Napa counties appear to be adding to the for-sale inventory, though not consistently. At the same time, Santa Clara, San Mateo, and San Francisco counties continued their losing streaks. However, as depicted in Figure 3, sales of homes in that price range increased by more than 20 percent in Santa Clara County and 14 percent in San Mateo County. 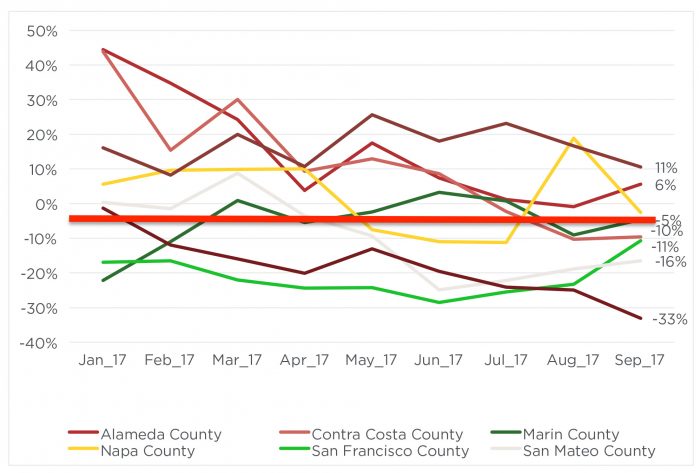 Buyer competition amid shrinking inventory led to heightened bidding wars and an increased share of homes selling over the asking price at all price ranges, though the highest percentage-point increase was for homes priced between $1 million and $2 million. In September, 68 percent of those homes sold for premiums, up from 54 percent last September. Lower-priced homes saw a 7 percent increase in premiums, with 62 percent selling for more than asking price. Overall, six in 10 Bay Area homes sold for more than asking price in in September, up from five in 10 last September.

Figure 6: Competition for homes priced between $1 million and $2 million

In a nutshell, while September’s numbers suggest that the market is pulling back, a deeper dive highlights the continued struggle Bay Area homebuyers face, characterized by fewer options and heightened competition. Interestingly though, accessibility to employment and urban amenities remain important to buyers who are flocking to inventory-poor Silicon Valley and San Francisco. And even in relatively less accessible Contra Costa and Alameda counties, neighborhoods with access to transit and urban amenities are faring better than neighborhoods without them.