November home sales improved in the Bay Area, with total transactions 10 percent higher from one year ago and a smaller year-to-date decrease than seen in October. The annual increase is quite impressive, given the average 8 percent year-over-year drop in sales of single-family homes in the last three Novembers, according to data from the California Association of Realtors. Additionally, November sales decreased by only 6 percent from the month before, while the last four years of October-to-November monthly declines averaged 16 percent.

Regionally, the year-over-year increase was relatively more noticeable in some areas — particularly in San Francisco, Silicon Valley, and the East Bay. Marin County continued to lag, with no increase in sales from last November and the largest year-to-date decline in the Bay Area, at 7 percent. Napa and Sonoma counties remained relatively consistent with last year. Figure 1 summarizes the changes in year-over-year and year-to-date sales in Bay Area counties.

The annual change in sales by price category also took an interesting turn from previous months. The largest sales gain was for homes priced between $2 million and $3 million, up 38 percent from last November, followed by a 26 percent increase in homes priced between $1 million and $2 million. And while $1 million-to-$2 million homes have generally sold at a higher rate this year, the November increase in sales of $2 million-to-$3 million homes brings the total number of those sales almost 1 percent higher on an annual basis. Again, since the majority of that inventory is located in Santa Clara County, the November rebound there helped push up the numbers. 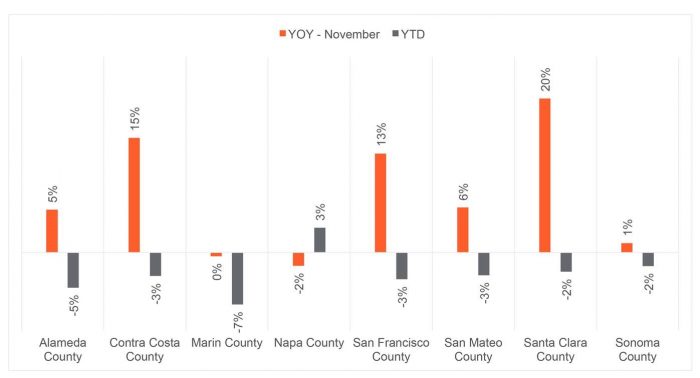 Median home prices, however, did not budge in November from the month before, with the total median price for the eight Bay Area counties remaining at $785,000. On an annual basis, the median price was up 8 percent for the region, although Alameda and San Mateo counties recorded more than 10 percent year-over-year appreciation. Napa, Marin, and San Francisco counties saw respective annual declines in home prices of 4 percent, 5 percent, and 1 percent. Napa’s median home price, however, peaked in November 2015, which is reflected in the decline. 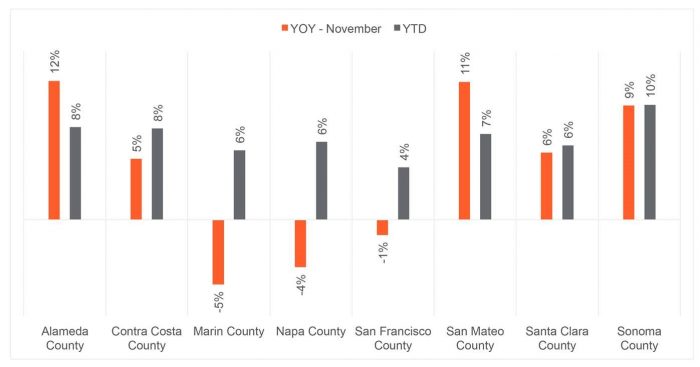 Furthermore, relatively higher market activity in San Mateo County was also reflected in increased competition. While the share of listings selling over the asking price has continually declined this year across the entire Bay Area, November saw increased competition from the month before.

Figure 3: Percentage-point change in the share of listings selling over the asking price from October to November 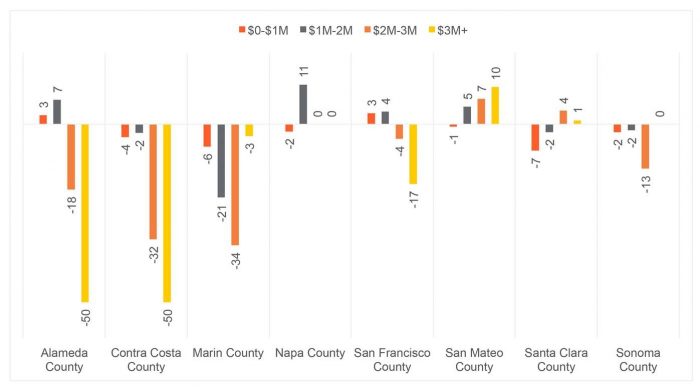 Lastly, can we expect the November sales pickup to maintain its momentum? The spike in activity was in large part due to increasing mortgage rates following the election and anticipation over further hikes — particularly in light of the belief that the Fed is going to raise interest rates at its December meeting. Buyers may continue to feel pressure to take advantage of current rates ahead of future increases.

A lack of homes for sale has been an ongoing issue for the last few years, and the November inventory numbers do not show any relief in sight. Total inventory for the eight Bay Area counties was 5 percent lower in November from a year ago, and larger declines of 10 percent and higher were seen in Napa, Sonoma, and Santa Clara counties. Some relief is evident in Alameda and Contra Costa counties, where inventory is up 2 percent overall, with the highest increases in the relatively affordable range of homes. Figure 4 illustrates changes in inventories by price group from last November.

Unfortunately, the most affordable inventory — homes in the sub-$1-million range — continued to decline by double digits and was 10 percent lower than last year. Higher-priced inventories are on average 6 percent higher. The lack of affordable inventory will play a critical role going forward, as the increase in mortgage rates will narrow the pool of eligible buyers who can afford homes. At Pacific Union’s recent third annual Real Estate and Economic Forecast, presented in partnership with John Burns Real Estate Consulting, an analysis showed that almost 126,500 additional households will not be able to afford a $1 million mortgage if interest rates increase from 4 percent to 5 percent. Another 121,150 households will drop off if mortgage rates reach 6 percent. Affordability will be the dominant constraint in the new era of higher mortgage rates.

Figure 4: November year-over-year change in the number of homes for sale 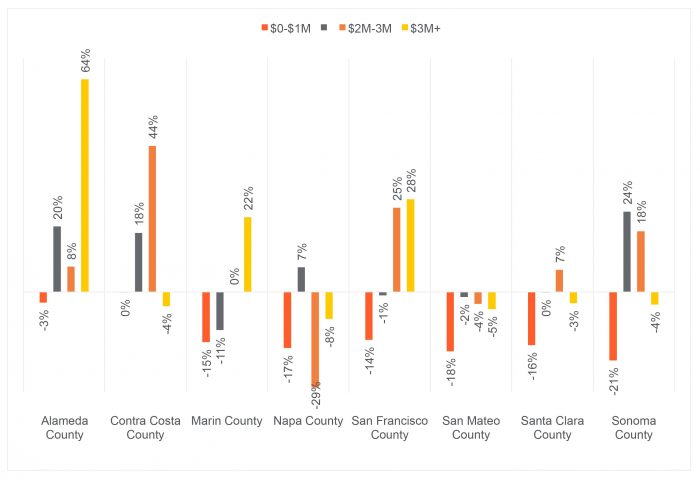