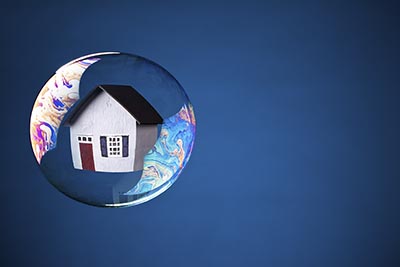 Memories of the mid-2000s housing-market bubble — and the collapse that followed — have Bay Area homebuyers, investors, and real estate professionals wondering whether the current run-up in prices is evidence of another dangerous bubble in the making. But new research from Freddie Mac says those fears are overblown.

In fact, in one major indicator of a housing bubble — measuring the median house price to the median household income (PTI ratio) — the Bay Area isn’t even included on the list of overly inflated U.S. metropolitan areas.

Freddie Mac’s “bubble” report, released Thursday, listed 17 metro area with high PTI rations, and the only California region to make the list was Los Angeles. The only other West Coast region was Portland, Oregon.

Here’s how Freddie Mac explained the latest PTI numbers, and San Francisco’s absence on the list:

“Housing bubbles can occur at a local or regional level without triggering a national bubble. Accordingly, we also track the PTI ratios for the 50 largest metro areas. House prices evolve very differently in each metro, so we calculate the median PTI ratio and outlier threshold separately for each metro. As an example, housing costs claim a larger portion of household income in San Francisco, where the median PTI is 9.0, than in Dallas, where the median PTI is 3.9. In addition, the volatility of the PTI ratio is higher in San Francisco than in Dallas. As a result, it takes a very high PTI in San Francisco to attract our attention, while a PTI ratio barely above the national median is cause for concern in Dallas.”

The report suggests that the Bay Area’s high housing prices can be explained by the region’s booming economy, particularly the tech industry, rather than an irrational “mass delusion” fomented by eager investors, which is the ultimate hallmark of a housing bubble.

Freddie Mac acknowledges that today’s overheated prices and a slowdown in housing construction are cause for concern nationwide, but it concludes that we are not in the midst of a housing bubble. Here are its final words on the subject:

“The evidence indicates there currently is no house price bubble in the U.S., despite the rapid increase of house prices over the last five years. However, the housing sector is significantly out of balance. The incomplete recovery in residential construction following the crisis of the last decade has created several years of pent-up demand for household formation. What we can’t predict is how this imbalance will eventually be resolved. Will there be a gradual restoration of a normal balance between supply and demand? Alternatively, will the rate of home building remain stubbornly low, exacerbating the income and wealth inequality that followed the Great Recession?

“Another bubble appears to be a less probable scenario, but not an impossible one.”